Science at the Seaside Workshops 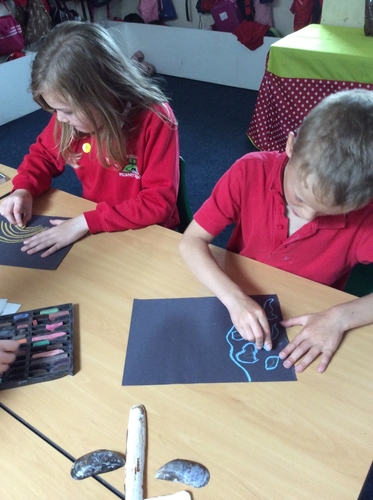 Our first year of School Workshops has ended and it was a great success! Thank you so much to everyone who gave us feedback this year so that next year’s workshops can be even better. This year we delivered workshops to circa 1000 pupils at 17 schools across Devon, including Littleham, Marwood, Bishops Nympton, Cockwood, Culmstock, Newton Tracey and Bassetts Farm.

The workshops aimed to develop ideas about the significance and value of the pupils’ local seaside through art and creative writing. Workshops began by using the seaside artefacts (either photographed or brought to class) to generate narratives about the objects and spark a discussion about the local environment. The children were then introduced to Victorian artefacts from local museums, for example Gosse illustrations from the RAMM, or shell baskets from Ilfracombe Museum, to use as inspiration when they created their illustrations for their narratives. The final stage of the workshop was to begin writing down the narrative they developed and illustrated in the earlier stages of the workshop in the form of a short story or poem.

The workshops were flexibly designed to accomodate the different schools’ learning focuses. For Littleham Primary school, the workshop was an opportunity to build on earlier work on personification in prose and poetry. Below, you can see how one pupil took inspiration from a fossil which reminded him of a boat.

‘It has been an absolute pleasure having [the workshop leader] come in for the last three weeks. I love to get the children excited about writing and [she] has really inspired us.’ -Georgina Cambridge, Littleham Primary

At Ermington Primary, the children visited Erme river and the nearby beaches prior to the workshop to take photos and record video diaries. The workshop aimed to support learning using the local environment and learning about environmental pollution, and the initial stage included discussion of problems like the Great Pacific Garbage patch and how they might be dealt with.

At Bassetts Farm primary, the pupils visited Charmouth and photographed the fossils they found for the workshop. The writing portion of the workshop tied into their learning focus on ‘Past, present, future’, which is reflected in some of their submissions to the Writing Competition, for example Charlotte’s winning story which begins ‘once upon a time’ and follows a seaworm propelled by a strong current to Exmouth beach. ‘Many years later’ two girls find his shell on the beach.

‘The workshops gave the school the opportunity to link the local area to our learning. We were also able to develop our children as writers and artists through the Seaside topic.’ -Bonnie Chivers, Dartmouth Academy.

The breadth of responses to the writing competition demonstrate how the pupils’ imaginations were sparked by the workshops. Several wrote about spending a day at the beach, having ice cream and building sandcastles; one year 3 pupil from Marwood wrote ‘People visit from far and wide, they travel the world just for a beach…bucket and spade in my hand, ready to make some sand hills’. We are still keen on the beach as a place of leisure, just like the Victorians!

Others were inspired to write about science. For example, there was a story about two experienced scientists who experimented with sea plants to produce ‘Aqua Infinity’ which allowed them to stay underwater. While they profited from selling their invention to divers in the world, they moved their lab into a cave underwater. ‘Every morning they loved walking up underwater to the brilliant sight of rainbow coloured fish swimming in front of their home’. Another student wrote about a scientist who found an injured fish in a rockpool and nursed it back to health in her lab. At the end of the story the fish is revealed to have been from an endangered species and is released into the wild.

Likewise, other children wrote stories about found objects on the beach ranging from pebbles and shells to wood planks and travelling socks. Oscar Berry focussed on collecting shells:

Suddenly Oscar […] looked at the shells and felt they looked sad in his house. The next day he went back to the beach and put them by the rock pools. They looked pretty and he thought they would make a good hiding place for the fishes.

Some other stories imagined the seaside as a place of adventure, piracy and lost treasures; mythical creatures and legends. In some the seaside was a magical place of mystery and wonder on the Atlantic coast and in others a lost homeland. For example, a year 3 student from Culmstock wrote a story about a mermaid who ‘lived underwater in a rotten wooden house’ who, after exchanging her ‘wonderful tail’ with ‘a pair of ordinary legs’ chose to answer to the call of the sea and return home:

The room was dark apart from the bright, luminous moon hanging in the sky outside. The mermaid looked at the girl asleep beside her and wanted to go home. She picked up her beautiful shell and pressed it against her ear, listening. ‘Come home to me,’ hissed  a voice from the shell. [..] Racing as fast as she could she ran from the house to the sea and dived into the cool ocean. Her tail splashed, catching the moonlight… she found herself back in her old rotten house with her family around her. When the girl woke up the next day the mermaid was gone and all that remained was a beautiful shell on her bedside table.

Some others wrote didactic animal stories; for example, a year 4 pupil from Culmstock wrote a story about a humpbacked whale who rescued his own hunters from a hurricane who ‘had learnt their lesson and never hunted whales again’.

Some others wrote anxiety stories about beaches that were not visited, about loneliness and quests for friendships. Some others wrote funny poems about sea creatures, for example, ‘The Wiggly, Jiggly Starfish’.

Several stories engaged with history, including one story written from the perspective of the shell in Botticelli’s The Birth of Venus. Another story was set in the Victorian period: ‘As you may know Queen Victoria loved the beach. […] All the girls would change in carts and then go in the sea’.

Many thanks to our workshop leaders, Tamara, Georgina, Anna-Marie and Sophia, and to all the teachers who worked with us to bring these workshops in their classrooms. Thank you also to all the children for being a pleasure to teach and for submitting such a fantastic range of entries to the Writing Competition.

‘ I quickly found that primary school students are full of wonderful, imaginative and original ideas…the workshops were fun, insightful and a refreshing, reinvigorating approach to some of these academic ideas’ -Sophia David, Workshop Leader

We will be running Science at the Seaside workshops across Devon in the upcoming academic year, building on the feedback we recieved this year. For further information please contact John (j.plunkett@ex.ac.uk) or Kyriaki (k.hadjiafxendi@bathspa.ac.uk).

This site uses Akismet to reduce spam. Learn how your comment data is processed.